The site owner, Acre Manchester Limited part of The Westcombe Group of Companies has submitted a Full Planning Application for the demolition of the existing office building and the construction of a new Hampton by Hilton Hotel with accompanying food and beverage offering. The proposal includes 212 bedrooms of which 11 are accessible to meet Part M of the Building Regulations, a ground floor restaurant facing Chester Road and Roof top bar providing excellent views of Old Trafford Football Stadium.

This website is intended to allow local residents and businesses the opportunity to review and comment on the proposals which will then be shared with Trafford Council as part of their assessment of this application. The Website will also provide updates on the development process.

The client team have secured and signed a franchise agreement for their Hampton by Hilton brand to deliver a focused service hotel, to cater to business and leisure guests visiting the city and the nearby national sports stadia. Through a rigorous consultation process of workshops and discussions, the design has evolved to provide an exciting addition to the local hospitality offers - through a process of workshops and discussions – to ensure the council aspirations for a significant, high quality, tall building on this site are sensitive and relevant to its residential and commercial context.

Chester Road has long been a key arterial route into the Manchester city centre.

In 1900, the Manchester botanical gardens were adjacent to the site, attracting thousands of visitors every year. Pre 1950, the cricket stadium was to the north of the site.

The site remained undeveloped until the late 20th century, with the first development shown in the 1980 Ordinance Survey Map.

The triangular site is 0.15ha in area and approximately 55m x 22m. It is bounded to the north by the A56, a key arterial route into the city centre. The corner site has a significant visible presence for both vehicles and pedestrians that pass through the crossroad junction. To the East of the site is Warwick Road, which links the Cricket Ground and the Football Stadium.

The local context is varied in style, from High rise development to low rise residential and commercial buildings

There is a high density of high rise buildings to the West of the site, and low rise domestic properties directly adjacent to the site along Hornby Street.

A number of large detached buildings surround the site, such as the head offices of Kelloggs and British Gas.

Sizeable commercial developments dominate the Chester Road / A56 These often have little interaction to the street frontage. 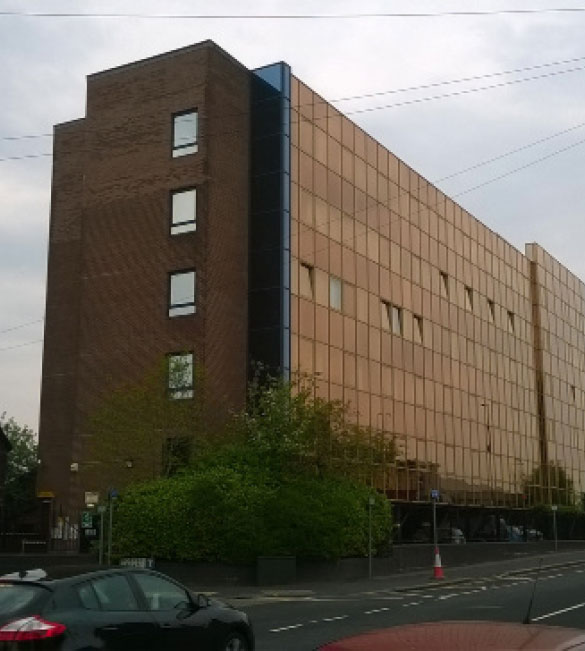 The building is currently an office block dating from 1990’s and totals 30,878 sq ft (2,868.6 sq m) of office floorspace. It has on street car parking. It is partially let with tenants including Manchester United FC and ORC International.

In 2016 consent was sought and granted for a change of use of the existing office building from office (Use Class B1 (a)) to residential (Use Class C3) to create 35 no. apartments.

This consent remains live until April 2019 and is capable of implementation.

The significance of that decision is that it effectively extinguishes any loss of office and employment considerations. Should consent not be granted for a hotel use the residential flat option permitted under the prior approval will be implemented. 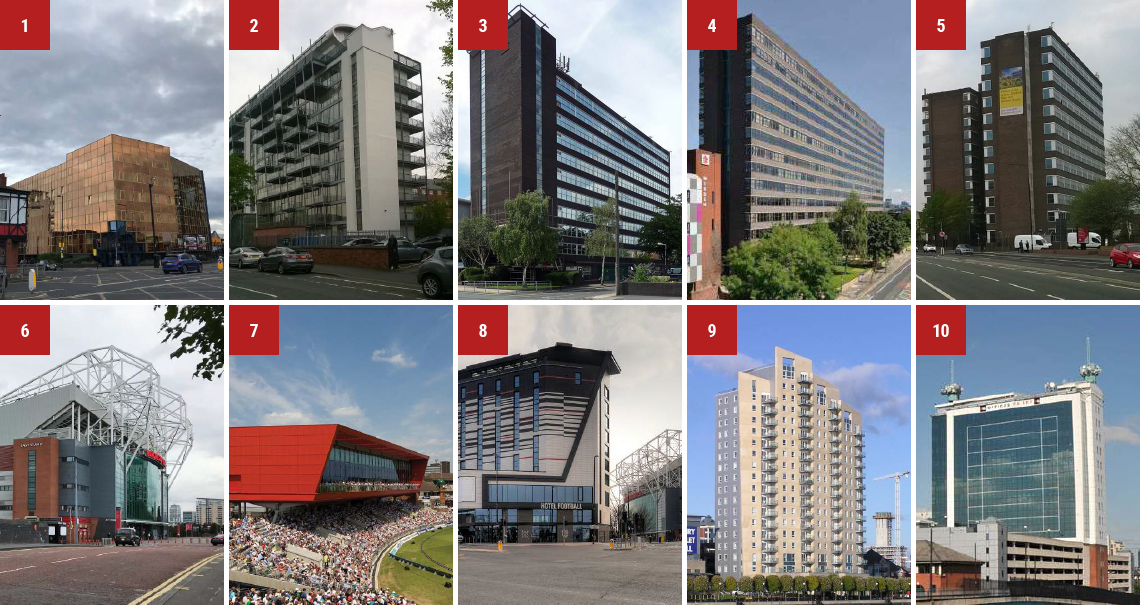 The area has a mixture of low / medium rise Leisure, Commercial and Residential uses along the A56 Chester Road Corridor and surrounds. The site is adjacent to residential properties comprising of 2 storey semi-detached brick built accommodation arranged on gridded streets.

However, there are several significant taller buildings dotted within the local context, that respond to the wider, more urban scale of the city.

This hotel proposal is for a tall building (greater than 9 storeys). As such, it does seek to stand above and apart from its context, for which there is not only adjacent precedent for doing so but, we propose, is also appropriate to this particular urban / street corner context. 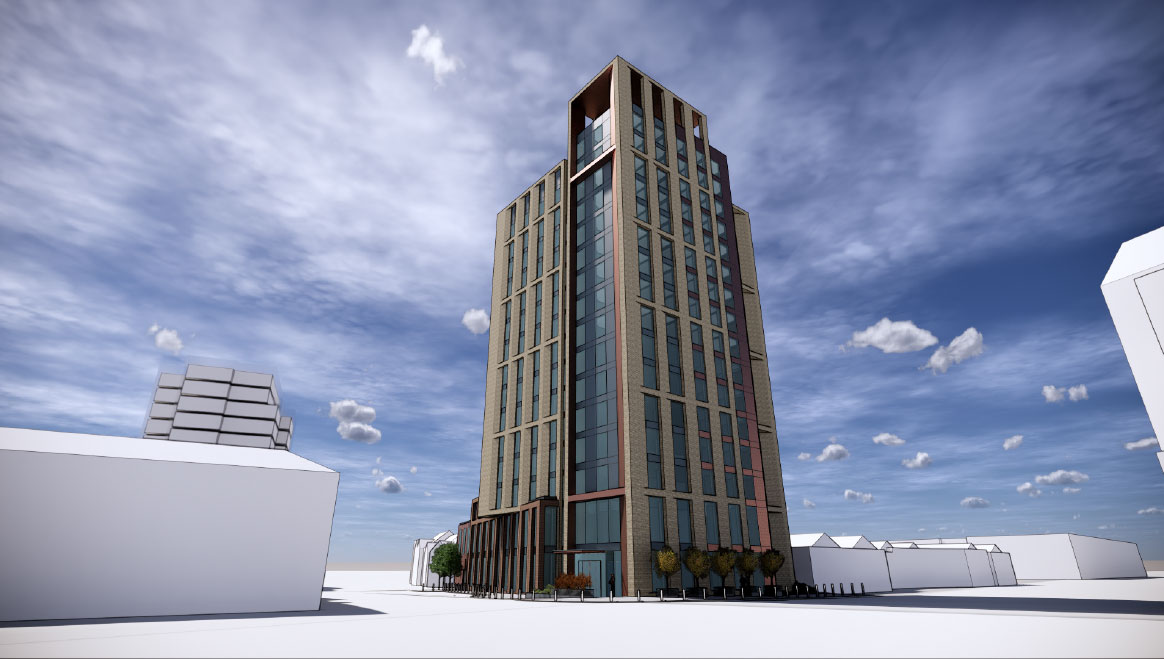 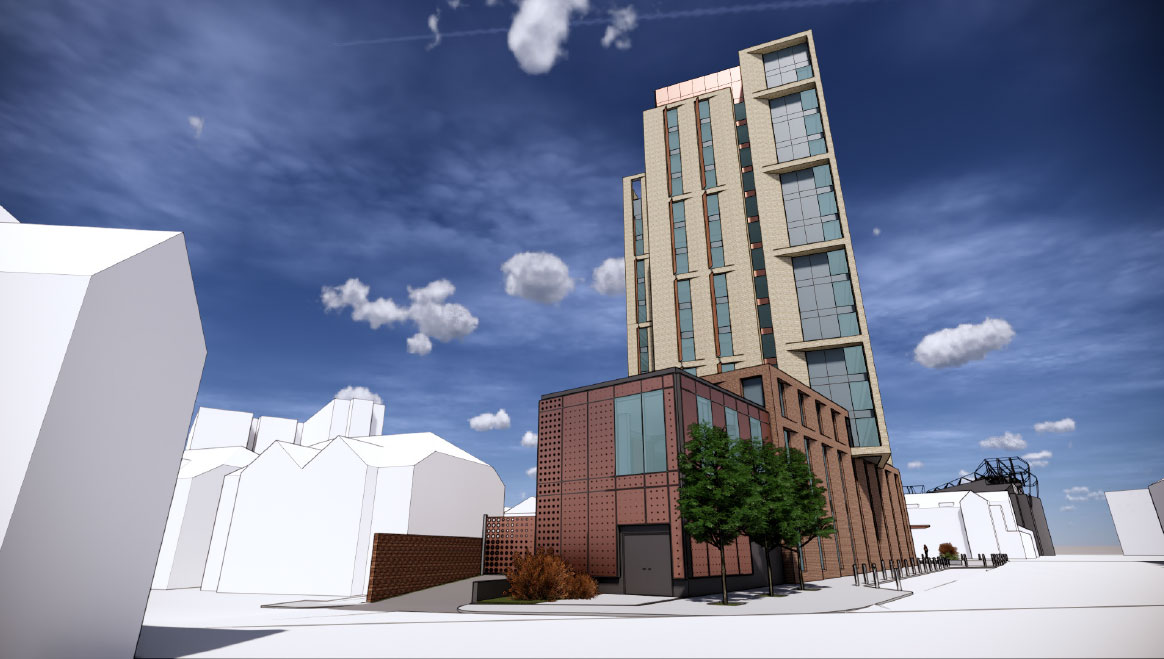